Yemen at a Crossroads

A peace deal between the Saudi-backed Yemeni government of President Abed Rabbu Mansour Hadi and southern Yemeni separatists signed in Riyadh on Nov. 5 is long on promise and short on detail, with implementation kicked down a road strewn with potential mine fields. Nevertheless, a very real sea change is taking place in the diplomatic atmospherics surrounding Yemen's bloody four-year civil war. On multiple fronts -- including the country's battered oil sector -- there is both talk and tangible action to de-escalate conflict and reignite economic activity.

The United Arab Emirates began winding down its engagement in Yemen over the summer, including its support for the Aden-based Southern Transitional Council (STC). The Sep. 14 attack on Saudi Aramco oil installations was the real catalyst for change, however, driving efforts both to resolve the bitter split in the anti-Houthi camp between the Saudi-backed government and its supposed STC allies in the south, and to start winding down the wider conflict with the northern Houthi rebels.

"What we have seen since the Aramco attacks is a real moment of opportunity for Yemen," notes April Longley Alley of Brussels-based think tank the Crisis Group.

Direct Houthi involvement in those particular attacks, which the US and Saudi Arabia have blamed on Iran, is unproven, but they have demonstrated beyond doubt the capability to hit significant Saudi economic targets, and Riyadh appears to have finally woken up to the gravity of the threat it faces (EC Oct.4'19). Talks are now taking place between the Saudi leadership and the Houthis.

Given the history of mistrust, these discussions are clearly vulnerable to being derailed. "I look at the Houthis and I see the doves are 10%, the hawks are 90%," notes a US-based source. But Yemeni analyst Abd al-Ghani al-Iryani insists both sides "are genuinely interested in keeping this [process] going." After fierce fighting in August and September, the battle front has been relatively calm, in an apparent response to a Houthi cease-fire offer. Increased humanitarian aid and at least 10 oil products tankers have been allowed through to Houthi territory via the Red Sea port of Hodeidah in the past few weeks.

The Saudis' policy towards Yemen is largely indecipherable, but since last year's murder of journalist Jamal Khashoggi, there appears to have been a change, with Crown Prince Mohammad bin Salman, architect of the Saudi intervention, taking a step back, and more input heard from other voices, notes one source. Prominent among the new voices is Deputy Defense Minister Khaled bin Salman, Prince Mohammed's younger brother. It is he who has been leading talks with the Houthis, according to a report from Qatari news site Al-Jazeera.

Riyadh appears to have accepted that a military victory against the Houthis is just not feasible. While no clear exit strategy has emerged as of yet, it was clear even before the September attacks that the Saudi intervention in Yemen had been a major failure. This gives the kingdom every incentive to pursue de-escalation.

In many ways, the inter-allied conflict between the Saudi-backed Yemeni forces and the STC has been more heated of late than the battle with the Houthis. Following STC advances in the summer, Hadi government troops in August counterattacked and "really battered the STC in Abyan -- I mean obliterated them," says the US-based source. "But they basically won't attack the Houthis," he complains, noting the absence of a response from Hadi forces when the Houthi rebels launched a major offensive in the northern Yemeni province of Najran in August.

"Privately, neither one of these sides expect [last week's Riyadh Agreement] can be a durable deal," argues Longley Alley. At no point since unification in 1990 has Yemen looked like resolving its north-south divide, with tensions spilling into open war in 1994 and again this year. Southerners resent what they see as Sanaa's domination of their region. And the Hadi government views the STC as nothing better than "a non-state militia with an agenda to break the country apart," Longley Alley adds.

Hadi forces apparently attempted to sabotage the deal last week with an attack on the STC, and Hadi and STC leader Aidarous al-Zubaidi reportedly declined to shake hands with each other in Riyadh on Tuesday. The agreement calls for a new 24-person cabinet to be formed within 30 days of signing, with equal representation from the south, including some STC ministers. But this fast-track timetable comes with a major lack of clarity over critical appointments at the Ministries of Interior and Defense, and over how new security deployments will be implemented, especially in areas previously controlled by the STC.

What's more, as Yemen expert Eleonora Ardemagni of the Italian Institute for International Political Studies notes, the STC by no means represents all southern separatist groups. "If the new government will not deliver on welfare and security provision," these rivals could charge the STC with betrayal of the "southern cause." The deal contains within it the seeds of its own destruction, she adds: "With the entrance of secessionists in extremely weak state institutions, Yemen seems to have formally entered a top-down managed path towards partition."

Nevertheless, risks and clear pitfalls aside, the Riyadh Agreement does offer the hope that Yemen might be turning a corner. "We see a best-case scenario with this deal as something that can keep a lid on underlying tensions so that a quick pivot to a national settlement can begin," Longley Alley says.

The Yemeni oil sector's management, authority and revenue sharing will shape the political process and trajectory of separatist and regional autonomy movements. A combination of war and tough operating conditions has brought Yemeni oil output down to just 60,000 barrels per day, one-quarter of 2012 levels. Theoretically, production could more than double within a year of peace taking hold, but with most fields past their peak, getting back over 200,000 b/d will need a longer time frame and further exploration. The real prize would be a restart to the Total-led 6.7 million ton per year Yemen LNG project, the country's largest industrial facility.

However, Yemen's significance to the energy world is largely geopolitical. As the Sep. 14 attacks dramatically demonstrated, the current conflict threatens oil operations in Saudi Arabia, the world's top oil exporter. And Yemen's location enables the Houthis, with their new drone capabilities, to disrupt global oil trade through both the Strait of Hormuz and the Red Sea.

The Yemen oil and gas industry has long been dogged by political interference, and this could roil any attempted reboot. General Ali Mohsin al-Ahmar, current vice president and deputy commander of the armed forces of Yemen, is among several politicians with family interests in the oil sector, notes Ardemagni.

Geography counts for a lot in Yemen. Houthi areas have no producing fields, and the northern Zaidi Shiite group will likely fight any attempt to impose a solution that cuts them out of a say in how oil wealth is shared. Hadi-backed forces control almost all producing fields, but viable export routes and terminals are largely in southern hands or in the Houthi sphere of influence.

In the east of Yemen, the Hadhramaut and Mahra provinces have distinct cultural identities from the rest of the south. And in Hadhramaut's case, this comes with existing oil autonomy and aspirations for broader regional autonomy. Foreign operators have left the province, and regional firm PetroMasila for some time has been in charge of the region's oil sector, currently producing around 35,000 b/d, over half the country's output.

PetroMasila runs its own operations but hands over oil marketing to the Hadi oil ministry. And the firm sees itself as remaining independent in any post-conflict scenario, one executive says. Currently, oil producing provinces, Hadhramaut included, receive 20% of the revenue from sales of locally produced oil. Several sources say these provincial hydrocarbon revenues are being paid regularly and used efficiently, at least as far as the Shabwa and Marib provinces are concerned. 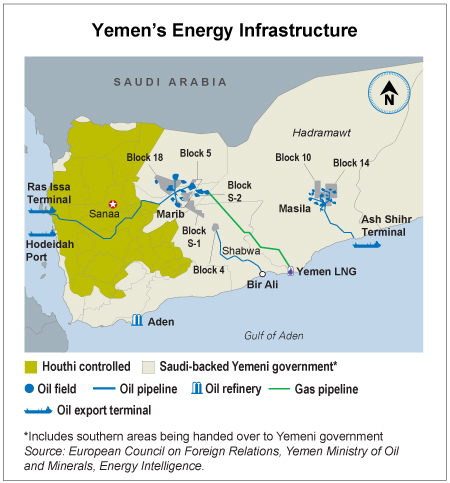 Improbably, the Hadi government has made progress on a new oil pipeline from government fields bypassing Houthi-controlled areas. This would give fields in the Marib and Shabwa provinces a route to market other than the currently shut-in westerly pipeline through Houthi territory (EC Oct.19'18). Originally, the Hadi oil ministry sought $127 million from foreign investors, but when this was not forthcoming, it managed to get the project started by itself.

Around 55 kilometers has already been built on what will be an 85 km pipeline from Block 5 to Block 4, where there is an existing export route to the Bir Ali/Rudhum terminal. "I think it should be completed by end of this year, early next year," says Syed Bokhari, managing director of Australian firm Petsec, which operates the nearby Block S-1. State-owned Safer's Block 18 is already connected to Block 5, and this new pipeline will enable a major export boost from the province.

Last month, Safer restarted exports from Block 18, trucking some 5,000 b/d to Block 4, operated by state Yicom. Potentially, output from OMV's Block S-2, currently producing around 15,000 b/d, could also join the pipeline, in addition to another 15,000-20,000 b/d from mothballed Block 5. And Petsec is in talks with the ministry to start Block S-1 operations. Bokhari says production here could hit 10,000-12,000 b/d within a year of gaining approval.

Post-conflict reconstruction will require massive foreign aid, and these projects, however welcome, will not make much of a dent in Yemen's funding needs. In contrast, a restart of Yemen LNG project would be potentially game-changing. Block 18 feeds the LNG plant, making it doubly significant. Facilities at the Balhaf liquefaction site and the pipeline from Block 18 have been kept in a good state, and security both at Balhaf and along the pipeline is tight, potentially allowing for a relatively quick reboot of operations.

Rafiq Latta is a senior Mideast correspondent at Energy Intelligence, based in Cyprus. The original version of this article appeared in Energy Compass.

INTERNATIONAL OIL DAILY
Russia Energy Sanctions a Delicate Balancing Act
President Joe Biden has emphasized that the US is lining up broad economic sanctions against Russia, if it should decide to invade Ukraine.
View More >
Exploration>